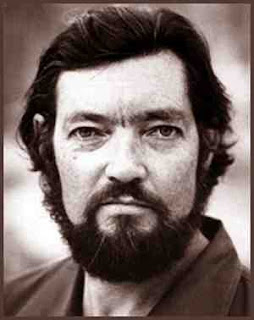 I don't know why it hasn't happened, but with the 25th anniversary of Julio Cortázar's death approaching next year, I would have hoped that someone would finally get around to publishing a Complete Works in English. I hold him in the same regard as my master, Jorge Luis Borges, and yet he doesn't seem to get the same level of academic respect and the number of academic publications as Borges.

It is because of his story "La noche boca arriba" ("Night Face Up") that I went into Latin-American Literature; it's not because of Borges. If I were a better translator, I would try and organize the project myself, but I am but a lowly Assistant Professor with no previous translations, and the sheer volume of his writings gives one pause before proceeding. So, someone please organize this. Count me in as a translator. I would love to tackle "Después del almuerzo."

We need this translation to happen. His work is that good. Read this story, "Night face up," and prepare to have your mind blown:

Not sure who translated this (but thank you to the person).
Posted by Mac at 1:20 PM

this story was translated from spanish by paul blackburn

Cool blog you got here. I'd like to read a bit more about that matter. Thanx for giving that data.
Sexy Lady
Escort service

I made my own translation of "Después del almuerzo" a few years ago because it seemed unlikely that it would get an official translation anytime soon. It's on my old blog at http://mysite.verizon.net/ckearin/dreamersrise181.html

I'd love to see a series of complete works, relying (naturally) mostly on Rabassa, instead of jettisoning the translations the author approved personally (as was done with Borges).

I'm writing a paper on Cortázar's "La noche boca arriba" and I found a really interesting article about this short story and I thought you might be interested in reading it (If you haven't read it already, since you're obviously a big fan). It's called “Sueño luego existo” written by Manuel José Botero Camacho. And what might look like a minor detail to some translators/people (the blanks between paragraphs for example) can make a major difference to the meaning that the writer was possibly trying to convey.

Does anyone know if there is an English translation of "Recortes de prensa" (Newspaper Clippings) available online?

I'd love to see a translation of Cortazar's complete stories! Why hasn't there been one? A three-volume complete stories is readily available in Spanish! How can we get this project to the attention of someone that would be able to do it!?

I want this too!

I too was drawn to this story in my university studies and even after ten years it has not left my imagination. Thank you for posting it here so I can enjoy it again!

I refer to a comment "anonymous'.
Here we have a team of translators from Spanish to English and Bengali, enthusiastic about translating Cortazar,s poems in the year of his centenary.

My Other Web Projects